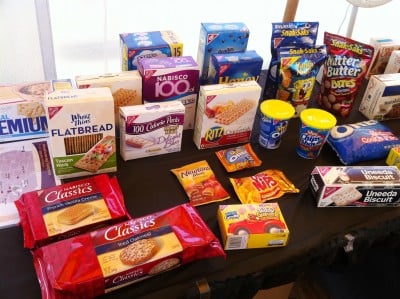 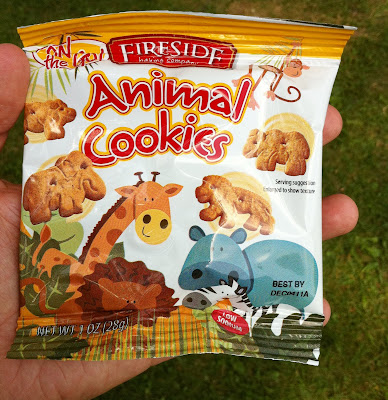 Even with a village of less than 1700 residents, McComb has quite a large role in the cookie and cracker industry. Their company Hearthside Food Solutions, formerly Consolidated Biscuit Company until last year’s purchase, now employs 1,400, has 9 cookie ovens and 4 cracker ovens, sends off 50 loaded trucks per day, and produces over 500 different items through over 150 different dough recipes.

This is a far cry from the one oven and 25 employees they started with back in 1963.

So when you’ve come a long way and have something to show for it, the most obvious thing to do… 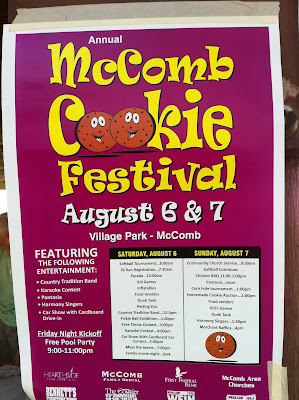 …is celebrate your achievement through a festival.

The festival did just this… 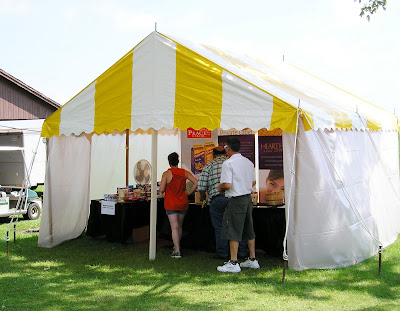 …with a central information tent set up by Hearthside Foods… 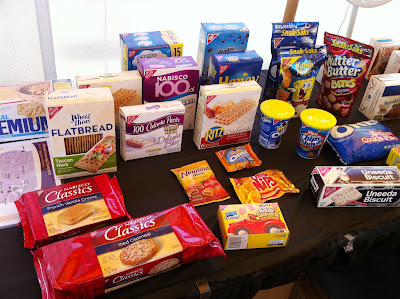 …where festival goers could see some of the products made locally… 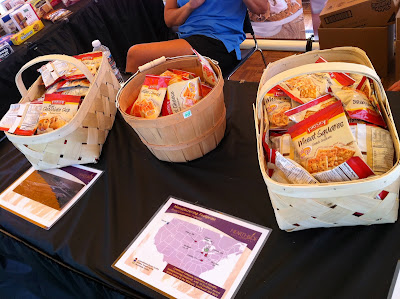 …and even take some samples home. 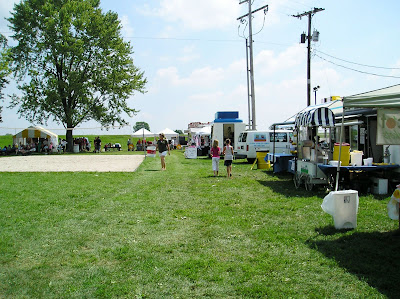 Outside, along the side of the festival grounds… 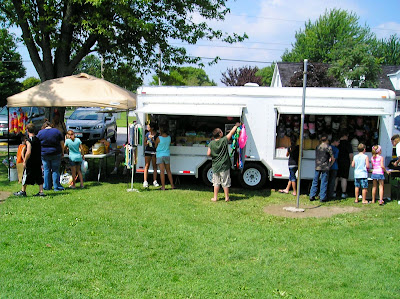 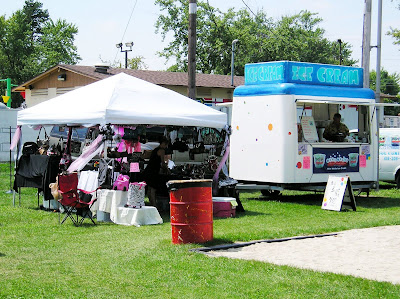 …there were a few gifts vendors… 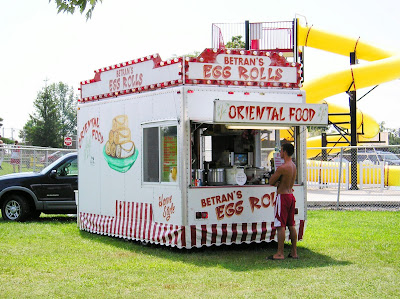 …some Chinese and grilled food… 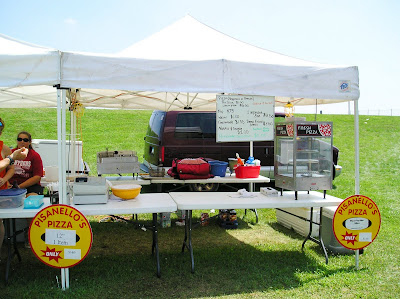 …and even a local pizza chain… 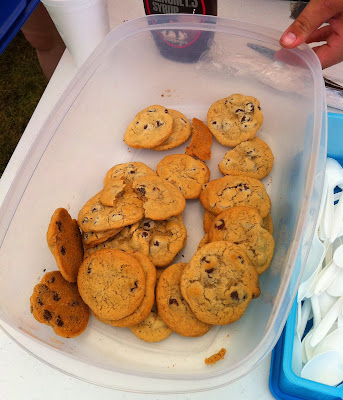 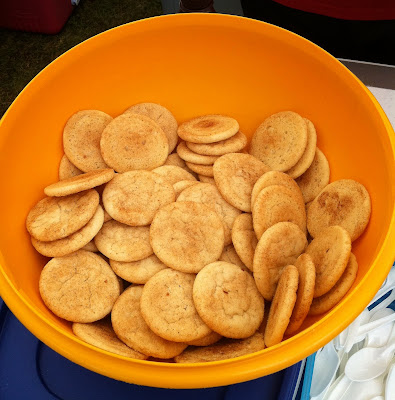 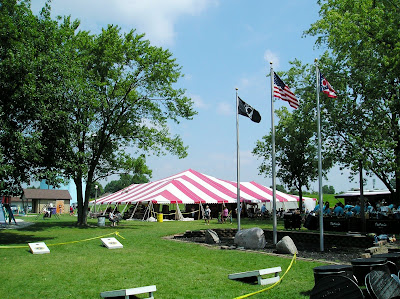 Festival goers either ate inside a large tent on the grounds…

…or in a picnic area where they could easily enjoy entertainment that included a band from Findlay High School.

As the music played, the children found entertainment…
. 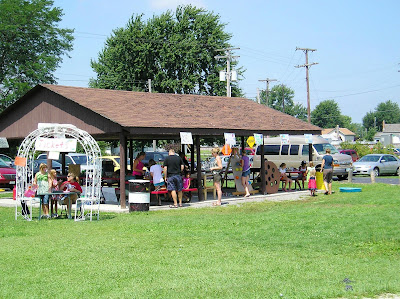 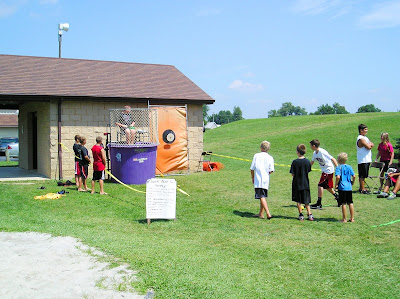 …at the kids’ activity pavilion, the dunk tank… 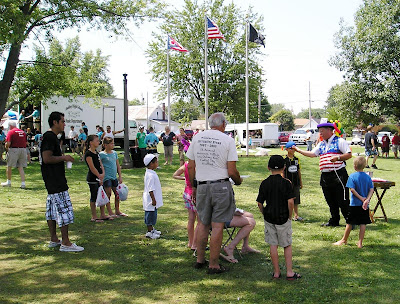 …or through a series of magic tricks.

With everyone seemingly busy with some activity, I decided to eat some lunch…
. 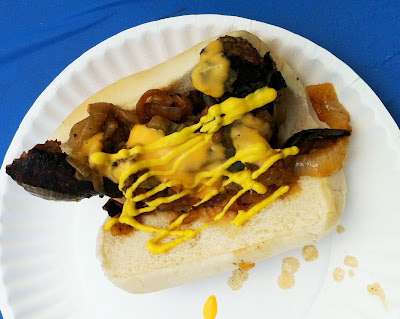 …and I had a nice sausage sandwich with sauteed onions, peppers, and cheese sauce.

As I downed the last bite of my sandwich, I started thinking of dessert possibilities… 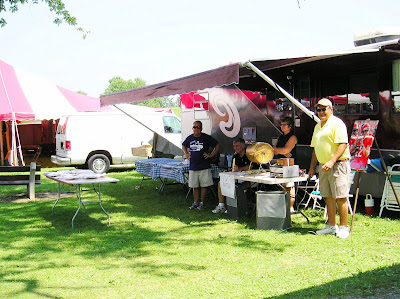 On the table to be auctioned off were plates of snickerdoodles, peanut butter cookies and chocolate chocolate chip, but it was the frosted sugar cookies (with sprinkles) that my eyes kept drifting to. Fortunately, there were about 5 plates of these decadent-looking frosted sugar cookies, so I felt pretty certain that I would get at least one of them!

I was so certain, in fact, that I bid rather conservatively at first. Once the bids hit around $5 or so, I stopped bidding and decided to wait upon the next plate of frosted sugar cookies.

But that logic seemed to fail me. By the second or third plate of frosted sugar cookies, one of the festival committee members actually outbid me and won the cookies herself.

I hadn’t even considered the possibility of insider bidding!

Eventually, there were only two frosted sugar cookie plates left and the bids only came faster. I was able to get a few bids in but it hit $6 before I knew it. When the announcer laughed and joked about how high the last plate would probably go for, I knew I was doomed.

Then, at the last second, the same festival committee member who outbid me before bid $7 and she won herself a second plate of cookies. But, as a man with the cookies brought them to her, she began motioning me to walk over.

Why would she call me over? I thought, but I approached her anyways.

The man with the cookies and I reached her about the same time and he was about to hand her that plate of cookies when she pointed to me and told him, “Give them to him.”

At first, I kindly protested, overwhelmed by her sweet gesture. When she insisted, I offered to pay her, but she refused.

“I outbid you,” she smiled. And then she handed the plate to me and said, “Enjoy the cookies.”

I carried the cookies back to my car, completely moved and thankful. 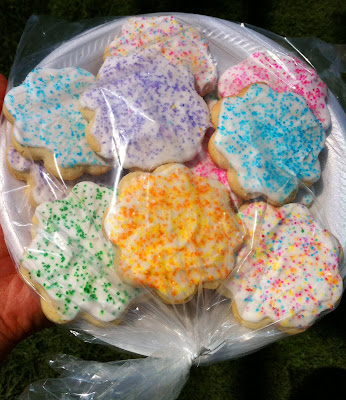